The 8-bit generation hosted a number of dungeon crawl RPG games, with Epyx's Apshai series being among the most popular.

I'd only ever played Temple of Apshai on the Commodore 64 and Atari computers, but I had heard rumors back in the day that the game originated on the TRS-80 Model I under Epyx' predecessor, Automated Simulations.  Today I managed to track that original 1979 version down online, created by Jon Freeman, Jeff Johnson and J.W. Connelley.  This early edition is quite a bit different from the later, better-known versions -- it's much closer to the mainframe Rogue games, and not exactly action-packed. 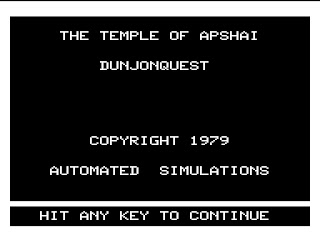 The Dungeons & Dragons inspiration is clear -- the game opens with a character generation and equipment dialogue with the inn/shopkeeper, rendered with text prompts and typos: 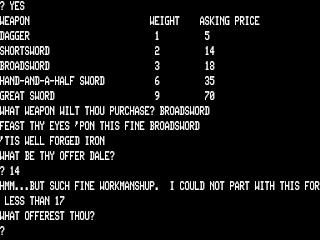 The game chains from one module to another -- treating character management and dungeon exploration as separate functions allows reuse of the precious, limited RAM.  Memory is also conserved by putting all of the descriptive text in the game's manual -- so rooms and treasures are referred to only by number within the game, and the player is expected to go read the details offline.

Of course, it's 1979, before thorough QA testing became standard, and this is written in BASIC, so it suffers the vulnerabilities common to the era.  There are nine playtesters credited in the game's manual, but even so the game can be crashed rather easily at certain junctions -- after equipping my character, I tried starting the game at Level 0 in answer to the prompt, and inadvertently destroyed the universe: 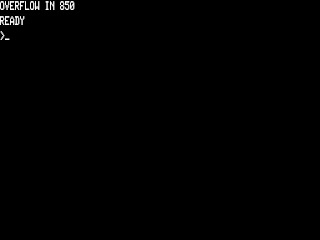 So I reset the machine, started again, and was glad to find my character stats had been saved.  Unfortunately, once the "action" starts (on Level 1 this time), it's clear that the game's BASIC implementation just isn't up to the task.  Screen redraws are painfully slow -- individual pixels can actually be seen turning on and off -- so while the player/monster movement and battle system is meant to be "real-time", it feels turn-based, and sluggish at that.  The graphics are very primitive, even by TRS-80 standards, using only half of the available resolution.  The player is represented as a blocky V pointing in one of the four cardinal directions, treasures are unidentified rectangles, and the monsters are generic cross shapes, identified only by the descriptive text on the right.  It's not much to look at, and unlike many TRS-80 games it doesn't look any more impressive in motion: 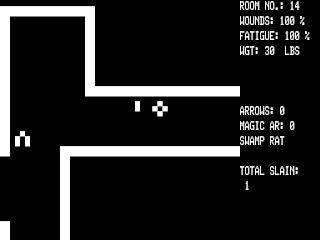 (That's me on the left, facing north.  The crosshair on the right is reportedly a SWAMP RAT, guarding a treasure that, if experience up to this point has been any indication, will be the fabled TREASURE #20.)

So while the spirit is willing, the technology is lame. I probably would have enjoyed this back in 1979, or at least been interested enough to put up with its limitations, but so many better games have followed in its footsteps that it's hard to appreciate it now.  Even with my nostalgia goggles on, I think I'll stick with the later versions for my semi-annual Apshai fix.  But there's a germ of a great idea here, and it's always interesting to see where a successful series began.
StillGaming at 10:14 AM
Share